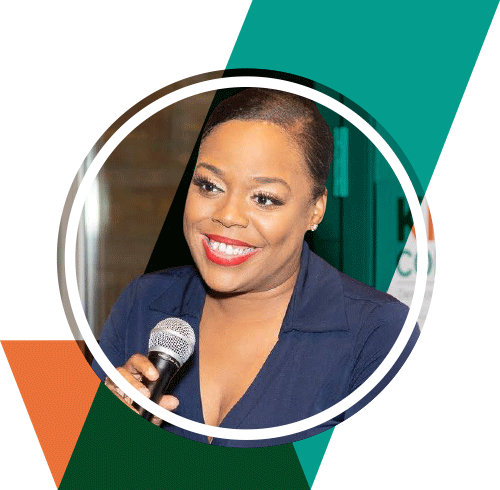 Kina is a lifelong activist and nationally recognized gun violence prevention and health care advocate with a proven track record of policy making, coalition building, and working with communities to improve public health and safety.

She was born and raised in the Austin neighborhood on the West Side of Chicago. She grew up in a working-class union family, her father a factory worker and her mother a crossing guard and certified nursing assistant, and attended Chicago public schools.

Growing up on the West Side of Chicago, Kina saw her community heavily impacted by gun violence, failing healthcare systems, lack of economic opportunity, and closed neighborhood schools. She knew she had to fight beyond the surface-level issues directly facing her community to address the systemic issues of poverty and neglect.

With organizing in her blood, Kina began organizing in the wake of the murder of Laquan McDonald. She went on to work with activists in Baton Rouge when Alton Sterling was shot and murdered. In that moment, Kina saw how the violence her community experienced extended beyond police brutality. Violence is the lead that poisons the drinking water, the food deserts, the public schools being shut down, the general neglect and divestment from Black and brown communities in the district. Like many who’ve gone unseen and unheard by the establishment, Kina didn’t have much faith in government – until she fought to bring the voice of the most marginalized communities into the legislative process.

In 2017, Kina founded the Chicago Neighborhood Alliance, with the goal of empowering activists to end gun violence in Chicago through civic engagement. She co-authored the Illinois Council on Women and Girls Act, which created a council to advise the governor and state lawmakers on issues concerning women and girls and served as the Council’s inaugural chairwoman. During her tenure as the Council’s chair, Kina was also selected by Chicago City Clerk Anna Valencia to serve on the Status of Women and Girls in Chicago working group.

Kina was a student in the Chicago Public Schools system, during which time she served as a Summer of Service Learning Ambassador. She went on to attend Carthage College and Louisiana State University, where she studied international political economy and sociology respectively. In 2016, Kina was also selected as a member of Generation Progress’ #Fight4AFuture National Leadership Council, which developed campaigns on gun violence prevention and criminal justice reform. Most recently she served as a stakeholder on President Biden’s transition team and task force for gun violence prevention.

IL-07 demands and deserves a leader who will take on challenges with a fresh approach. We cannot proceed with business-as-usual. We need new leadership like Kina, who will address institutionalized poverty and inequity head on – not just in IL-07 but across the country. Kina has spent her life turning activism into legislative action, writing and passing policy and organizing on a national scale. Kina will take this same passion and fearlessness all the way to the halls of Congress to stand up for the people of IL-07 and keep the IL-07 pushing forward.

who will address institutionalized poverty and inequity head on – not just in the IL-07 but across the country.

who will address institutionalized poverty and inequity head on – not just in the IL-07 but across the country.

PAID FOR BY KINA COLLINS FOR CONGRESS